Are you looking for information about a particular place or topic?
Just click on Site Map for a listing of PRC web pages that deal with that information.

Protect Californians from End-of-Life Suffering, Neurosurgeon Says
(California Globe — July 28, 2021)
“[O]ur current law lacks transparency or accountability, and Senate Bill 380 by Sen. Susan Eggman (D-Stockton) would make changes to the law, ultimately removing safeguards and making changes that are dangerous and unnecessary….
…CDPH [California Department of Public Health] revealed at a public hearing in 2018 that physicians and others do not comply with the law, but the state has no enforcement activity to ensure compliance.  This leaves us with incomplete information at best and non-existent information at the worst….
Right now, we don’t know if people are being coerced into using the EOLA [End of Life Options Act].”
More on California

Second Annual Report on Medical Assistance in Dying in Canada 2020
(Publication date: June 2021)
Canada permits MAID (both euthanasia by lethal injection and assisted suicide).
In 2020, there were 7,595 cases of MAID, accounting for 2.5% of all deaths. (p.5)
The most commonly cited reason for requesting MAID was the  loss of ability to engage in meaningful activities (84.9%) followed by a loss of ability to perform activities of daily living (81.7%). (P. 6)
More on Canada

Featured article
“‘AGT’ Golden Buzzer Star Nightbirde Delivers Important Health Update After Sharing Cancer Story”
(Good Housekeeping — June 10, 2021)
It didn’t take long for 30-year-old vocalist Jane Marczweski — known professionally as Nightbirdie — to win over the hearts of America’s Got Talent judges….
During the audition, however, Nightbirdie shared some tough personal news — she has “some cancer” in her lungs, spine and liver.  She also revealed that she was given a 2% chance of survival….
“I’m so much more than the bad things that happen to me…You can’t wait until life isn’t hard anymore before you decide to be happy.”

Bills introduced in 2021 to legalize or expand doctor-prescribed suicide 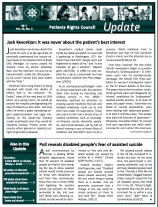 The Status of US assisted-suicide bills introduced in  2021:
Legalization bills
Expansion bills

Canada allows euthanasia for patients who are not dying

Who will speak for you?
Imagine you are very seriously ill or are in an accident tomorrow and so severely injured that you aren’t able to communicate about your health care wishes for several weeks. Who would make health care decisions for you during that time?

Every person from the age of 18 and older should have a well written durable power of attorney for health care in which they have named an individual they know and trust, who agrees with their views and values, and who can be assertive on their behalf.

States that have transformed the crime of assisted suicide into a “medical treatment.”

Scroll down for other Recent Developments, and for Featured Articles.

“AMA Helps Normalize Organ Harvesting after Euthanasia”
(National Review – May 26, 2021)
“Now, organ harvesting after euthanasia has become so normalized within the medical intellegentsia, that an American Medical Association publication, JAMA Surgery, had a letter debate – not about the propriety of killing and harvesting, but about whether the kill should begin at home or in a hospital….
[I]n Ontario, Canada, the organ donation society is told in advance by doctors of planned euthanasia, and representatives call the patient/family to ask for their organs….
No, of course suicide prevention is not offered! That might get in the way of suffering people agreeing to be transformed into so many natural resources.”
More on Organ Donation and Organ Transplantation

Maine releases 2020 report on assisted suicide dated, March 1, 2021.
The “Patient Directed Care 2020 Annual Report” contains sparse information, lacking details that were included in reports from other states. All of the statistics are found on page 5 of the report.

“‘AGT’ Golden Buzzer Star Nightbirde Delivers Important Health Update After Sharing Cancer Story”
(Good Housekeeping — June 10, 2021)
It didn’t take long for 30-year-old vocalist Jane Marczweski — known professionally as Nightbirdie — to win over the hearts of America’s Got Talent judges….
During the audition, however, Nightbirdie shared some tough personal news — she has “some cancer” in her lungs, spine and liver.  She also revealed that she was given a 2% chance of survival….
“I’m so much more than the bad things that happen to me…You can’t wait until life isn’t hard anymore before you decide to be happy.”

“Art Imitates Life — Inside the Insidious World of Elder Guardianships”
(Diane Dimond — February 27, 2021)
“I found a myriad of actual cases, nationwide, in which that original petition for guardianship was grossly exaggerated and, in some cases, completely fabricated.  But once a judge accepts such a petition and the senior becomes a “ward of the court,” it is next to impossible to undo.  Guardians, often paid hundreds of dollars an hour, and those they hire on to attend to the elderly are paid out of the ward’s life savings.  It is a cottage industry of elder law attorneys, guardians, caregivers, real estate agents and others who feast on the spoils of the ward’s life after guardianship takes hold.”
More on Guardianship

“Wider access to assisted dying in Canada will be catastrophic for the disabled”
(National Post — February 13, 2021)
Nobody is more sensitive to the inevitable consequence than David Shannon, who became quadriplegic following a spinal cord injury in a rugby scrum at age 18….”I’ve loved and been loved.  My proudest accomplishment is that I lived.”
More on Canada
More on Disability Perspective

“When Assisted Suicide ‘Protections’ Become Barriers”
(National Review — January 29, 2020)
When pitching legislation, assisted-suicide advocates solemnly promise that they have written, oh so “protective guidelines” into the legislation to prevent abuse.
Then, once the law is safely in place, advocates grouse that the guidelines they touted are “obstacles” or “barriers”…

“Assisted Suicide: Rhetoric v. Reality”
(Patients Rights Council)
Proponents of doctor-prescribed suicide point to Oregon to show that there have been no problems or abuses in the  years since its law went into effect.  Contrasting this rhetoric with the reality is crucial.
More on Oregon

Have you heard about VSED?
It stands for voluntarily stopping eating and drinking. VSED is being promoted by assisted-suicide activists who are also working to force health care providers to participate in it.  Important Questions & Answers about VSED

From the bookshelf…
In 1991, Ann Humphry, the co-founder of the Hemlock Society (now called Compassion and Choices) committed suicide. Her death made headlines worldwide.

Prior to her death, Ann contacted Rita Marker, a staunch euthanasia opponent. Over time, the two became close friends, and Ann asked Rita to make public secrets about the right-to-die movement — secrets that had weighed heavily on Ann.

Two years after Ann’s tragic death, the book, Deadly Compassion: The Death of Ann Humphry and the Truth About Euthanasia was published. It recounts Ann’s personal story, the founding of the Hemlock Society, and activities of euthanasia and doctor-prescribed suicide advocates. Thousands of copies of the book were sold in the United States, England, Canada and Australia. (Read excerpts from reviews of the book.)

Now, for the first time, you can read Deadly Compassion in its entirety on line in PDF format.