From the book jacket: 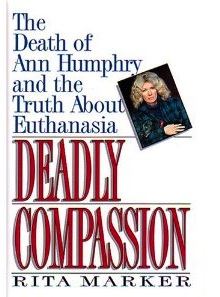 Ann Humphry’s suicide in 1991 made headlines worldwide. One of the reasons her death was so compelling was her allegation, in her suicide note, that she was driven to kill herself by her husband, Derek Humphry, co-founder of the Hemlock Society and author of the number-one best-seller Final Exit.

In Deadly Compassion Rita Marker relates the explosive details of this tragic death and the dark side of the euthanasia movement. Combining the shocking, true-life story of Ann’s despair and suicide with compelling arguments against ever allowing the legalization of euthanasia, Rita Marker has written a book that is disturbing, moving, and thoroughly convincing.

Rita Marker tells Ann’s account of her life with Derek Humphry: from their happy times together co-founding the Hemlock Society to his leaving her after she was diagnosed with cancer. Here is the story of Ann’s terrible guilt after she and Derek helped her parents kill themselves – with Ann smothering her mother to death with a laundry bag when the pills didn’t work – and her belief that Derek would allow her no grief and no remorse. And here, too, is the story of a remarkable friendship. When Ann felt alone and abandoned, she turned to Rita Marker – having known Rita only as her most vocal opponent on the subject of legalizing euthanasia.

In Deadly Compassion, Rita Marker also explores all of the issues surrounding euthanasia – and some of the most famous right-to-die cases. She discusses in depth the career of Jack Kevorkian, who has written articles advocating medical experiments on death-row prisoners – while they are still alive. And she explains the ramifications of euthanasia in a country without adequate health insurance, like America, where people who really want to live might choose death rather than bankrupt their families.

Deadly Compassion is essential reading for anyone who has misgivings about giving doctors the right to kill. It is also the story of the senseless death of a sensitive woman who discovered that her life’s work was a dreadful mistake – and who believed that the man she loved wanted her dead.

What have they said about DEADLY COMPASSION?“Marker movingly reminds us of the dangers of hubris, not to mention simple convenience and greed….her main point should sober any of us who easily accept the arguments about dying to preserve the dignity of life.” Washington Post

“Both a warm tribute to a lost friend and a cool argument by an experienced opponent of euthanasia.” Kirkus Reviews

“Deadly Compassion is more than a dry debate over euthanasia…Marker is an engaging storyteller and she effectively states her case against euthanasia.” San Francisco Chronicle

“It is a book for anyone concerned about life – and death.” Oakland Press

“[Marker’s] concern that the distinction between assisted suicide and murder can be thin is vivid and palpable.” Publisher’s Weekly

“[Deadly Compassion] makes a compelling case that what the debate about ‘assisted suicide’ has really progressed to is not allowing people to die, but killing them.” Detroit News

“[Deadly Compassion] is in the end the story of one woman as a symbol of the debate that has raised hard questions and forced stark choices in the minds of many. Marker challenges her readers to use Ann Humphry’s life and death to judge what is meant by the ‘right’ to die.” Pittsburgh Post-Gazette

“To say that Deadly Compassion is both a distressing and a gripping book does not convey its force.” Quadrant(Australia)

“Deadly Compassion may well fulfill its function of blunting the campaign of those who believe, along with B.F. Skinner, that ‘many old people, living in pain or as a burden to others, would be glad to be put to death humanely.'” British Medical Journal

Deadly Compassion by Rita Marker (William Morrow, 1993; Harper/Collins, 1994; Avon, 1995) is available in most public libraries, from Amazon.com, or can be ordered from the Patients Rights Council.