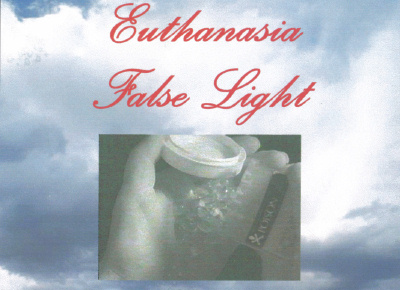 An award winning video that illustrates what euthanasia is really about.

The comment most often made by those in audiences who have viewed the video is, “I’ve never thought of that!”

The video has won two prestigious national Telly Awards. The highly-respected Telly Awards were established in l980 and showcase outstanding television and video productions. Euthanasia: FALSE LIGHT, categorized as a non-broadcast film, won in the “social issues” category, showing that the video really moves people, even film judges, to see the very real personal and social dangers inherent in the practices of assisted suicide and euthanasia. Over 9,000 total entries were submitted and judged.

PURPOSE OF VIDEO:
Because there is a tremendous need for something short enough to hold people’s attention, yet thought provoking enough for people to gain new insights into what the “right to die” is really about, the IAETF produced a video to meet that need.

For the most part, people have NOT made up their minds on euthanasia and assisted suicide so, when given the opportunity to reflect on various questions surrounding those issues, a substantial number end up not supporting the “right-to-die” agenda.

The video addresses points which are most apt to cause people to question the advisability of legalizing assisted death. Each of those points is contained in Euthanasia: FALSE LIGHT.

POLLING RESULTS REVEALING:
Prior to producing the video, the IAETF commissioned a polling firm to determine exactly what the general public thinks about euthanasia and assisted suicide and what issues need to be addressed to make the video most effective.

The polling results consistently found that the vast majority of Americans have little understanding about the issues of euthanasia and assisted suicide.

Surprisingly, that was the case in both California and Oregon, where “right-to-die” measures have been on the ballot and the issues openly discussed during political campaigns.

Most polled thought that the “right to die” or “death with dignity” movement was about “pulling the plug” (the right to refuse unwanted, overly burdensome life-sustaining treatment).

Overall, people were unaware that the euthanasia movement is about making people die, not letting them die.

Most importantly, the polling found that when neutral, unbiased questions were asked — giving people an opportunity to think about the issues — a significant number of those who had initially indicated support for euthanasia and assisted suicide dramatically changed their position.

For example, in the statewide poll in California, the percentage of those who strongly favored legalizing euthanasia decreased from 32% at the beginning of the short 20-minute poll to 28% toward the end of the survey, while those who strongly opposed legalization increased from 28% at the beginning of the poll to 40% at the end. [Charlton Poll, January 1995]

In Oregon, when those polled statewide were asked initially how they had voted or would have voted on Measure 16 (Oregon’s law permitting assisted suicide), 47% favored the measure, 45% opposed it, and 8% were undecided.

However, later in the poll they were asked, “If the election were held today would you vote yes or no on Measure 16?” The change in response was again significant. Only 43% would have voted yes, while 52% would have voted no, and 5% were undecided. [Charlton Poll, February 1995]

The polling clearly indicates that the need for education is great. And the video, Euthanasia: FALSE LIGHT, meets a major part of that need.

Narrated by actor Joseph Campanella, the video looks at euthanasia and assisted suicide through the eyes of five people — three patients, a doctor, and a hospice nurse, all of whom speak from their hearts, not from a script.

The three patients — Denny Brace, Jim Curly, and Kelly Markham — talk about what it means to be diagnosed as “terminally ill” and indicate that, if euthanasia or assisted suicide had been legal when they were told that they only had months to live, they would have seriously considered an early death.

Denny Brace rejected treatment when his doctor coldly predicted he’d be dead in twelve months. He found a new oncologist, went through chemotherapy, and — three years later, when Euthanasia: FALSE LIGHT was filmed — although not cancer free, his pain was under control; he was able to jog, lift weights and work part time in construction.

Jim Curly was told he had three months to live, but he outlived his doctor. Today he’s retired and spends his time with his grandchildren — two of whom were born after he was expected to be dead.

Kelly Markham was told by her doctors that she had only six months to live. They were wrong. Now, ten years later, she is happily married.

If assisted suicide or euthanasia had been legal when they were told they had only months to live, Denny Brace, Jim Curly, and Kelly Markham might have chosen death — seduced by the FALSE LIGHT of euthanasia.

Robin Bernhoft, MD notes that it’s a lot easier to push people out of the picture than to actually get involved with them. He calls on physicians to care for and about their patients as individuals, and he points out the tragic experience of legalized euthanasia in Holland.

Donna Howell, RN a hospice nurse who has devoted her life to the care of the terminally ill, asks what kind of people we will become if we legalize killing of patients. She urges that we devote our energies to providing quality care and effective pain control, rather than giving drugs to end lives prematurely.